In 2018, we outlined the rise of faith based adoption laws across the United States. Today, we’re updating our coverage of faith-based adoption laws, their increased passage, and why every American- regardless of sexual orientation or gender identity- should be concerned.  Contact us to learn more about this issue.

In early 2018, two foster care providers in the city of Philadelphia stopped issuing foster care licenses to same-sex foster parents, citing their religious beliefs as a basis for the decision. The City stopped sending foster care referrals to these providers, who responded by filing a lawsuit against the City for infringing upon their free exercise rights. The providers, including Catholic Social Services, sought relief through multiple appeals phases and have taken their case to the supreme court. The case before the Supreme Court this year is Fulton v. The City of Philadelphia.

In Fulton, the Supreme Court will decide if the City has the right to exclude a Catholic agency from participating in a public foster care system because that Catholic agency does not work with same-sex couples. A ruling in favor of Catholic Social Services in Fulton has potentially devastating consequences: ruling in favor of CSS gives faith-based adoption agencies untethered license to discriminate.

Faith-Based Adoption Laws: An LGBTQ Issue, or a Broader Concern?

Why Faith-Based Adoption Laws Harm Everyone

Whenever laws are enacted that threaten the rights of more vulnerable groups, the distribution of justice becomes dependent on beneficiaries of this uneven power dynamic. At present, faith-based adoption laws negatively impact LGBTQ adoptive and foster families; however, the future impact these laws may have on other families is unpredictable, broad and impossible to define.

Were a favorable ruling for Fulton to become precedent in this case, faith-based adoption agencies may use religious doctrine as grounds for discrimination on the basis of faith, marital status, family structure, political affiliation, and more.  People from all backgrounds could experience this shift: transracial couples, interfaith couples, and children who receive services from faith-based child welfare agencies.

Further, in Fulton v. Philadelphia The Court may determine how faith-based adoption agencies can use federal funding to provide services to families- or, how they use federal funding to discriminate against families. A ruling in favor of Catholic Social Services  could set a precedent that allows faith-based adoption agencies and child welfare organizations to accept federal funds for programs as they continue to implement discriminatory practices that prevent children from being cared for by loving families.

While there’s no question that faith-based adoption laws cause dignitary harm, they also place stress on systems their advocates claim they’re designed to help. According to the 2018 AFCARS report, more than 437,000 children were living in public foster care systems across the United States- 125,422 of those children were waiting to be adopted.

Excluding LGBTQ parents to serve as resources for waiting children is a failure of child welfare systems. More than two million LGBTQ couples, individuals and families across the United States are interested in serving as family resources for children through adoption and foster care. LGBTQ families are currently raising more than 3% of children living in foster care across the country. The American Academy of Pediatrics supports full access to adoption and foster care rights for same-sex couples as part of promoting growth of stable and healthy families for all children. Currently, no data supports the exclusion of LGBTQ individuals or couples as part of the framework of a healthy foster care system.

What’s Next for Faith-Based Adoption Laws?

As we await the Supreme Court’s decision in Fulton v. The City of Philadelphia, adoption agencies across the United States continue to work with a growing number of LGBTQ parents.  This year, Adoptions Together is honored to celebrate our 30th anniversary forming families from every background- including those families from the LGBTQ community who make up a vital part of our foundation. In 2019, we received the Human Rights Campaign’s All Children, All Families Project’s Innovator Seal in recognition of our work serving LGBTQ youth and families, and we continue to advocate for systematic change to make child welfare work for everyone. 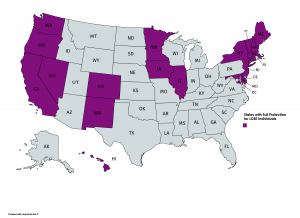 Today, you can make a difference. Encourage your representative to support legislation that welcomes all families, regardless of religious belief, sexual orientation or gender identity.  Progress is being made on local and state levels to pass anti-discrimination laws that protect people on the basis of sexual orientation and gender identity. But currently, 28 states lack explicit statewide laws protecting people from discrimination on the basis of sexual orientation or gender identity in employment, housing and public accommodations.  Support public officials who support welcoming platforms. And support adoption agencies that support our communities- all of our communities.  Because we must support every child, every family, every step of the way.